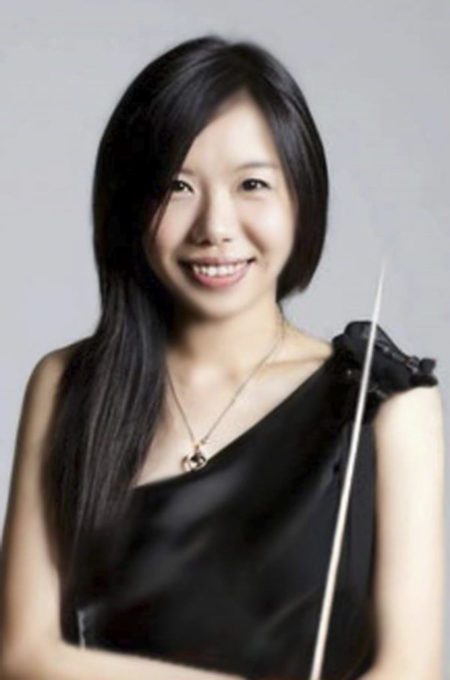 CJ Wu is a dynamic and expressive young conductor, with a background as a professional violinist in her native Taiwan.

CJ Wu won the 1st Prize at the Brass Band Conductors’ Association (BBCA) Conducting Competition in the UK in 2021 and the 1st Prize of the Progetto Johannes Brahms by Filarmonica Gioachino Rossini in Pesaro. In 2019, she conducted Brahms’ Symphonies No.1 and No.2 at the Teatro Rossini in Pesaro sharing the podium with Maestro Donato Renzetti.

During the 2018-19 season, CJ was a Visiting Artist at Cornell University, where she conducted and coached the symphony and chamber orchestras. She also assisted the Taipei Civic Symphony Orchestra, returning later as guest conductor.

She has appeared in concert with Manchester’s professional contemporary music ensemble, Psappha, and in master classes with the Manchester Camerata, Northern Ballet Sinfonia, and North East Wales Sinfonia. Her graduation concert from the Royal Northern College of Music in Manchester, where she studied conducting under Mark Heron and Clark Rundell, took place in 2021 with the BBC Philharmonic Orchestra.

As a violinist, CJ received her Master’s degree in 2010 and has worked with most of Taiwan’s professional orchestras, including as a concertmaster. She is the Founder and Artistic Director of the Taipei Chamber Music Ensemble and the Rhein String Quartet. CJ is currently completing her Soloist Diploma in Conducting at the Royal Danish Academy of Music in the class of Professor Giordano Bellincampi.

pura musica is dedicated to promoting female conductors. We are pleased to represent CJ Wu in Germany, Austria and Switzerland. Please get in touch with us for booking inquiries and further information.