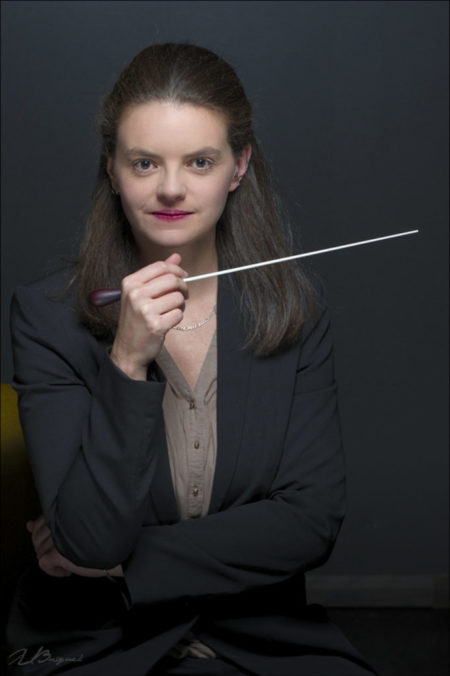 Guillemette Daboval studied conducting with a special focus on choir. In 2019, she obtained her Higher Diploma of Music Performance (DNSPM) from the Conservatory of Music and Dance in Lyon (CNSMD) where she studied in the class of Lionel Sow. In 2022 she graduated from the Lyon Conservatory with a master’s degree in choir conducting and music pedagogy.

At the same time, she continued her studies in voice and orchestra conducting. Her teachers include Enrique Mazzola, Debora Waldman, and Raphaël Pichon. Conducting Bizet’s “Carmen” with the North Czech Philharmonic Orchestra she was able to further her experience in opera conducting.

At the 2022 Berlin Opernfest, Guillemette Daboval served as Assistant Conductor for J. Strauss’ “Die Fledermaus”. In 2019, she assisted Quentin Hindley in a production of Mozart’s Zauberflöte.

In 2021 Guillemette was a semi-finalist for the prestigious Eric Ericson Award in Stockholm. In the recent Erich Bergel Conducting Competition, she was of the few female conductors advancing to the last round.

A special focus of Guillemette’s work has always been on choir conducting. Invited by Mathieu Romano, she conducted the Aedes Ensemble in 2022 and will return in 2023 to work with the ensemble. Other engagements include engagements with the Youth Choir and the Orchestre des Champs-Elysées.

As Assistant to Lionel Sow and Pierre Bestion, she regularly works with the Choeur de Radio France.  She frequently returns to work with the Accentus Choir.

In 2017 she founded the Ensemble Esquisses, a professional women’s choir which performed during the Quotidiennes in July 2021 at La Cité de la Voix in Vézelay (France).

Guillemette considers working with amateur ensembles an important part of her musical mission. She regularly works with the Children’s Choir of the National Opera of Montpellier and the Maîtrise des Petits Chanteurs de Lyon.

Guillemette has a particular interest in collaborating on creative work and is an avid advocate of contemporary music. She has premiered pieces by Emmanuelle Da Costa, Sami Naslin and the Requiem in memory of Gérard Streletski by William Edery.

pura musica is dedicated to promoting female conductors. We are pleased to represent Guillemette Daboval in Germany, Austria and Switzerland. Please get in touch with us for booking inquiries and further information.