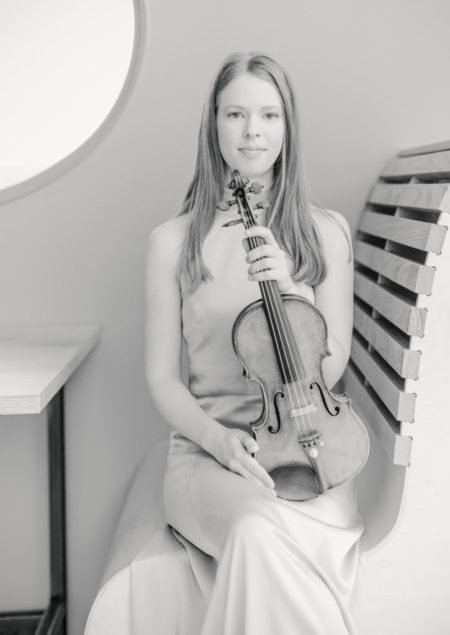 Emerging Dutch violinist Hawijch Elders is considered one of the most interesting young musicians of our time.

Since October 2022, she has been Artist in Residence at the Queen Elisabeth Music Chapel in Brussels, Belgium, where she studies with Augustin Dumay.

Most recently, Hawijch received the First Prize at the Leonid Kogan International Competition for Young Violinists 2021. Other accomplishments include the Second Prize and special prizes at the 2021 Odessa International Violin Competition.

Hawijch’s most important musical influence is Ilya Grubert, with whom she has studied since 2016. Under his tutelage, she completed her bachelor’s and master’s degrees at the Amsterdam Conservatory with the highest honors. Previously, she studied with Benzion Shamir and participated in masterclasses with Ivry Gitlis, Shlomo Mintz, and Pierre Amoyal.

For pura musica, Hawijch Elders offers a program dedicated to the works of European female composers through the centuries.

pura musica is dedicated to promoting female musicians. We are pleased to represent Hawijch Elders in Germany, Austria and Switzerland. Please get in touch with us for booking inquiries and further information.