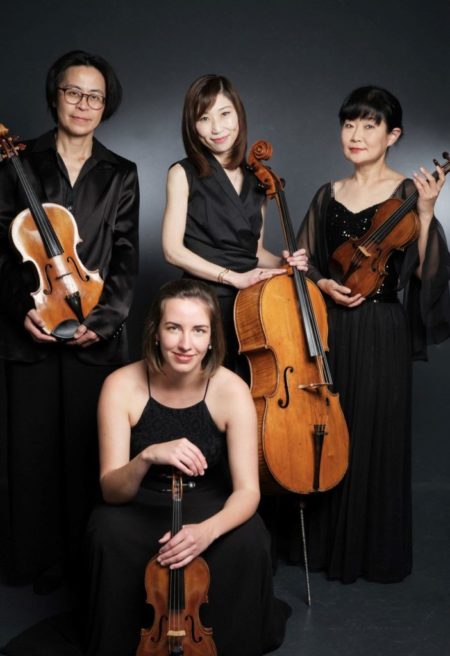 The Stuttgart-based Lotus Quartet was founded in Tokyo in 1992. As one of the few ensembles on the international quartet scene with female players in all positions, the Lotus Quartet has been playing for a considerably long time with a largely constant lineup. The characteristic synthesis of cultural influences from Japan and Germany has been deepened since 2022 by the addition of violinist Swantje Tauscher, the first concertmaster of the Freiburg Philharmonic Orchestra, as the second violin.

In addition to the music of the Viennese Classicism, German Romanticism, and French Impressionism, the Lotus Quartet’s repertoire includes contemporary Japanese composers such as Tōru Takemitsu and Toshio Hosokawa, as well as works by Helmut Lachenmann and the Second Viennese School. In addition, the four musicians are dedicated to promoting compositions by female composers.

Their recordings of selected works by Mozart and contemporary Japanese composers (Teldec, 1997 and 2000) and a production of lesser-known quartets by Johann Baptist Vanhal (cpo, 2014) attracted particular attention.

The Lotus Quartet established itself as a regular guest of the most important chamber music series and leading festivals in Germany and Japan. Since 1998, it has performed every year in Darmstadt, where it presented a complete Beethoven cycle. Series with works by Mozart, Schubert, Schumann and Brahms followed. In 2017, the Lotus Quartet performed a Beethoven cycle in Japan, followed by performances of Beethoven’s late quartets in several Japanese cities in 2018. The ensemble’s 30th anniversary tour in February 2023 will culminate in performances of Felix Mendelssohn’s six quartets.

pura musica is dedicated to promoting female musicians. We are pleased to represent the Lotus Quartet’s special project “Fanny’s daughters” in Germany, Austria and Switzerland. Please get in touch with us for booking inquiries and further information.