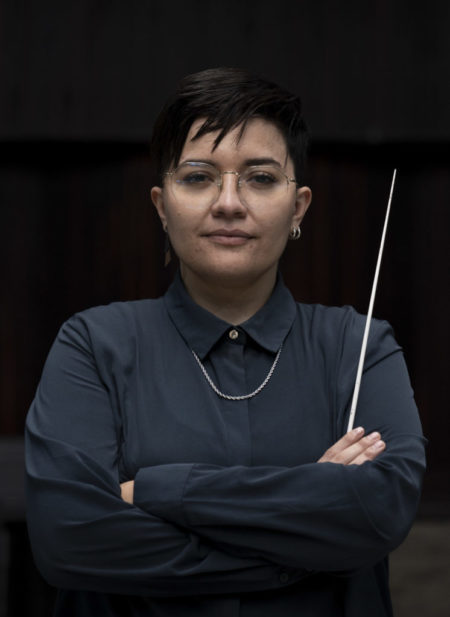 Colombian conductor and cellist Tatiana Pérez is considered one of the most outstanding talents of her generation in South America.

Tatiana holds a Master’s degree from EAFIT University in cello performance as well as orchestra conducting. Her most important mentors have been Roberto Gonzales-Monjas and David Greilsammer. She has worked to date with the EAFIT Symphony Orchestra, the Iberacademy Orchestra, the Simón Bolívar Orchestra in Venezuela, and the Metropolitan Orchestra in Caracas, amongst others. She participated in the first international conducting workshop at the University of Corpas and the national conducting workshop at the National Symphony Orchestra of Colombia.

As a conductor, Tatiana can draw on a remarkable repertoire experience as a cellist. Since her early teenage years, she has regularly performed with the Young Philharmonic Orchestra of Colombia, Orchestre de la Francophonie, YOA Orchestra of the Americas, International Academy of the Theater of the Lake and Binational Orchestra, taking her all over Colombia and to Brazil, Canada, Guatemala, Bolivia, Venezuela, Argentina, Chile, Cuba, Switzerland, Austria, and the United States. She has performed with “The New World Symphony” in Miami, the Summer Academy of the Mozarteum University in Austria, and at the Lucerne and Salzburg festivals.

Future engagements include Purcell’s Dido and Aeneas with the Orquesta Sinfonica Universidad del Cauca as well as her debut with the Cali Philharmonic Orchestra.

Winner of the Banco de la República Young Interpreters series with the Cello Quartet Medellín and a multiple scholarship recipient of the Cartagena International Music Festival, she continues to be an avid chamber musician.

Tatiana Pérez is the Artistic Director of “La Semana de las Cuerdas”, a program promoting the musical development of young music students in the Medellín region.

pura musica is dedicated to promoting female conductors. We are pleased to represent Tatiana Pérez worldwide. Please get in touch with us for booking inquiries and further information.